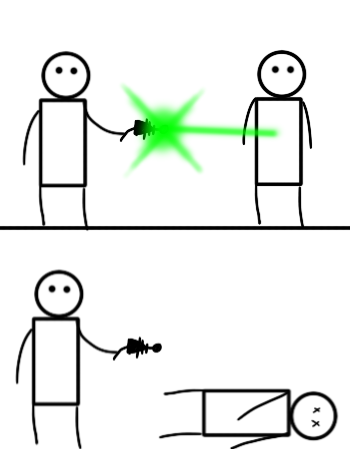 A death ray causing death.
"It was sweeping around swiftly and steadily, this flaming death, this invisible, inevitable sword of heat."
— The War of the Worlds
Advertisement:

The Death Ray is an old Speculative Fiction staple, probably cliché or a Discredited Trope by now, but the little kid in all of us would kill for a Death Ray. In function it's a Ray Gun that causes death (It doesn't actually shoot out Death, awesome as that would be); whatever the ray hits, dies — instantly and without question. It can do this via disintegration, somehow draining the target's life force, rapid calcination or some other method. When scaled up, it becomes a Wave-Motion Gun.

Visually, it's probably going to emit a red beam and look scary compared to a hero's clean chrome Ray Gun (which, of course, just makes you sleep). It can vary from your garden variety Disintegrator Ray because the Death Ray usually causes inanimate things to explode but humans to keel over dead. Why don't humans explode? Probably because it would raise the flick into R or NC-17 status (plus, it costs a ton more in Special Effects compared to a cheap ray effect). In effect, it is the Designated Villain of retro Sci-Fi weapons, much worse than its "little brother" the Agony Beam.

Anyone using it is probably a villain with his own villain store discount card, a (Mad) Scientist who just happened to think making a Death Ray would be cool, or space aliens, death bots, or what have you. It's unlikely for an Evil Overlord's henchmen to be armed with these, as he's more likely to keep the only one for himself, despite the fact that making all his minions Instakill Mooks would be useful to his army.

Sci-Fi villains are not the only ones who can use a Death Ray — many an Evil Sorcerer or other Fantasy villain will have a spell, artifact, or other piece of magical phlebotinum that basically amounts to one of these.

A planetary Death Ray will be more akin to the Doomsday Device, clock and all, and will only work twice: Once when test fired, to prove it works to the UN member countries; and another to annihilate the Red Shirt Army, before being destroyed/stopped by the heroes.

Eclipse Cannon is one of many doomsday weapons made on the ARK. Utilizing the power of the Chaos Emeralds, at half-power the Eclipse Cannon can blow a hole in the moon. At full-power, it can destroy a planet.

Eclipse Cannon is one of many doomsday weapons made on the ARK. Utilizing the power of the Chaos Emeralds, at half-power the Eclipse Cannon can blow a hole in the moon. At full-power, it can destroy a planet.