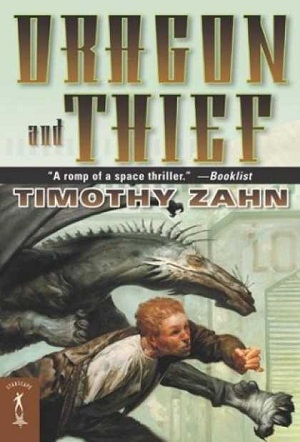 Dragonback is a sci-fi series by Timothy Zahn.

Jack Morgan is fourteen, has been framed for a crime involved with the biggest corporation this side of the Orion Arm, and is very, very alone. With the exception of his uncle Virge, a AI emulating his late Uncle Virgil, he is completely isolated. That is, until a fierce space battle occurs right above his head. When the scuffle ends in a spectacular crash for one of the ships, Jack explores the wreckage to encounters the sole survivor - a K'da Warrior Poet named Draycos. After escaping the landing party of the mysterious other fleet in the aforementioned space battle, the pair come to an agreement (albeit a reluctant one on the part of Uncle Virge, with his self centered outlook). Draycos would do his best to help clear Jack's name. In return, Jack would help Draycos save his race from a planned genocide.