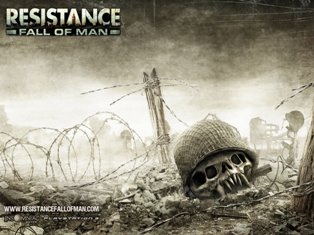 "Brotherhood, strength and fortitude... in the face of the Angry Night."
— The last radio transmission received from Russia, looped endlessly over 12,000 stations before the fall of the Red Curtain.
Advertisement:

Resistance is a series of First-Person Shooters (beginning with Resistance: Fall of Man) by Insomniac Games. Yes, the guys who did Spyro the Dragon and Ratchet & Clank.

In this era, the Spanish-American War was prevented via diplomacy, World War I was mostly contained to Europe and its ideological fallout greatly diminished by the lack of US intervention and the triumph of the Russian Monarchy over the Bolsheviks. With the only conflict being a simmering tension with Moscow, and with the lack of American capital to fuel rebuilding — and to go under during the Great Depression — the nation-states of Europe are forced to unite to both reconstruct themselves and to contain the Russian Czar, who isolates Russia from the world behind the "Red Curtain," a heavily-fortified border wall along the western frontier of the Russian Empire (and reminiscent of the Berlin Wall, only manned by the Czar’s State Sec instead of communists). As a result, the mutual hostility within Europe largely fades away and their economies are relatively quickly rebuilt. As such Benito Mussolini, Joseph Stalin, Adolf Hitler and their compatriots never rise to power, and World War II never happens.

Or, rather, never in a way humanity could have predicted.

After a few decades of tension between the West and the Russian Empire and some disturbing reports from those spies who manage to evade the Czar's secret police, Russia apparently disintegrates overnight. Refugees come to nearby countries pleading for help and warning of something called "The Angry Night" before dying mysteriously. A team sent to investigate disappears, and shortly afterward, in the final weeks of 1949, the Red Curtain falls apart to let loose a deluge, which continental Europeans will soon dub "The Deathless Plague." Within months, most of Eurasia is overrun by a race of creatures called the Chimera.

A year passes, and the British Isles alone have thus far been spared by the Chimeran horde that has all but destroyed humanity on the mainland thanks to the English Channel - until the Chimera dig under and pop up in the middle of London, decapitating most of the surviving UED leadership and delivering England into enemy hands in one fell swoop as the survivors flee North to Scotland and try to hold off the horde. The USA, whose government has been strictly censoring all information coming from Europe, passing it off as an influenza epidemic, quickly sends help. The US soldiers are told they will be fighting an invading Russian army, and are completely unprepared for what they actually encounter. The first wave of their relief force is slaughtered within hours save for one man - Sergeant Nathan Hale, an Army Ranger who is resistant to the virus.

Cue a long slog through the UK, during which Hale kills several Chimeran Angels (more or less a telepathic General) and destroys the central tower of the Chimera's country-wide network of them, which allows the humans to kick the Chimera out of Britain and allows a stalemate in the European theater to ensue. In the end Hale is kidnapped by American troops in strange uniforms and gas masks for unknown reasons.

Resistance: Fall of Man launched concurrently with the PlayStation 3, and was the system's Killer App for several months as Sony tried to figure out what they were doing.

Insomniac released Resistance 2 in 2008. In that, the US has captured a strange Angel called "Daedalus". Its appearance has caused the Chimera to greatly increase their tactical capabilities, and they have staged a massive invasion of the United States from the West and East coast. Nathan Hale, now a Lieutenant is put in a platoon of soldiers who can also resist the Chimera virus and sent to track down the Russian scientist who can stop Daedalus. Notable for hinting at major revelations regarding the origin of the Chimera. The Alternate Reality Game Project Abraham was a lead up to Resistance 2 that detailed what happened before Fall of Man, and revealed that Hale’s resistance to the Chimera virus was neither accidental nor natural.

An Interquel, Resistance: Retribution was released for the PSP in 2009. It features James Grayson, a Royal Marine with a personal reason for hating the Chimera and several of the first game's supporting characters and their quest to help The Maquis free France and Germany from the Chimera. Notable for switching from the main series' First-Person Shooter gameplay to being a Third-Person Shooter, and hinting at yet more unresolved plot points for the fans to fill with Epileptic Trees.

Resistance 3 was released in 2011. After the events of Resistance 2 the Chimera have succeeded in invading the U.S. and the remnants of humanity live a meager existence in hiding. One of Nathan Hale's old comrades, Sergeant Joe Capelli, is persuaded by the Russian scientist from before, Dr. Fyodor Malikov, to go to New York and destroy a giant tower the Chimera built that is freezing the planet. Like its predecessors, Resistance 3 raised questions about the Chimera, and failed to answer a single one.

A second portable game, Resistance: Burning Skies, was released in 2012 on the PlayStation Vita. Burning Skies takes place during the Chimeran invasion of America, and focuses on Tom Riley, a New York City fireman who joins the fight against the Chimera. Unlike Retribution, Burning Skies uses the same first-person gameplay style as the main games, and also makes use of the Vita's touchscreen.