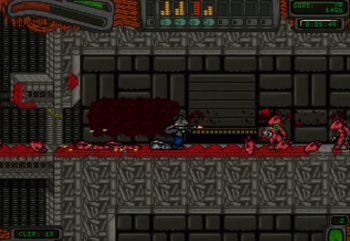 It's basically like this.
An 2011 Action Game by Team Happy Rainbow Panda Bears, loosely based on the old webcomic Rework the Dead

by David Hopkins (mostly known for Jack), basically a Zombie Apocalypse with Furries. It doesn't follow the original group of soldiers but a dog named Leigh, who seems to be the only still-living person in an evacuated city, now overrun by undead creatures called Zombies "Reworks". Thanks to his friend Davis, who communicates with him from a safe place, he finds out that the city will be nuked in a few hours, but there's a military base where he might be safe from the blasts if he descends deep enough in the bunkers...

The game itself is a close clone of Abuse: a mix of platform and shooting with a hybrid mouse/keyboard interface, sort of a First-Person Shooter brought onto a 2D plane. It adds some touches of its own like a Sprint Meter, boss battles, an higher emphasis on aiming, and a story developed through several cutscenes. Progress is saved only between levels.

It stands perfectly on its own and requires no prior knowledge of the webcomics it takes inspiration from, with the only advantage being that... they might open the door to one or two more interpretations of the game’s ending. Also a fair warning: since we're dealing with the works of a very polarizing author, just know that main characters, storylines and especially themes of them are not found here – this is just a straight horror title.

There's no official website, but it can be downloaded here