Video Game / Road of the Dead 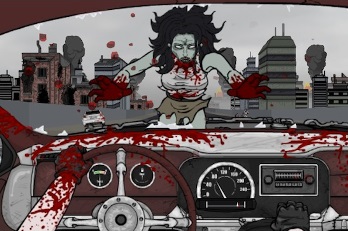 This Is Gonna Suck... For the zombie.
Advertisement:

Road of the Dead

is an Adobe Flash game on Newgrounds about John Creasman, a car mechanic who must escape a city currently suffering from a Zombie Apocalypse. He must also charge through military checkpoints that save his progress. It is playable here

was released in August 2013, starring a pair of soldiers, Cocheta and Diane, attempting to escape the outbreak. The developers released Segway of the Dead

earlier in the same year as an April Fools' Day joke; the makers later made a video

composed of the angriest reviews they got.

It received a Gaiden Game titled Lab of the Dead.