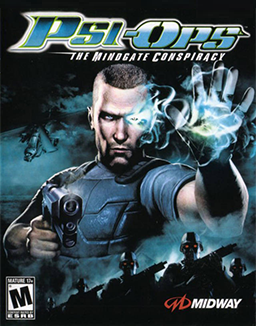 I will take your thoughts away...
Advertisement:

Psi-Opsnote Another name for psychological warfare is a Third-Person Shooter designed by Brian Eddy for the PS2, Xbox and PC that incorporates Psychic Powers into combat and puzzle solving. The game centers around Nick Scryer, a powerful psychic in the employ of the government who has been stripped of his memories and given a new identity in order to infiltrate "The Movement", a terrorist organization led by powerful psychics who are defectors from the government. He is aided by Sara, a Telepath who is also undercover.

As the game progresses the mental blocks inhibiting his powers slowly give way, causing a power to resurface just in time for a new puzzle. He gains several powers, among them Telekinesis, Mind Control, Astral Projection, and Pyrokinesis.

While the shooter aspects are pretty standard, and the story is fairly engaging, where the game really shines is in the many, many, many creative and inventive ways players can solve puzzles, kill enemies... and torture them. This game really has possibly the highest Video Game Cruelty Potential of any PS2 games. Leaving aside the wanton (and fun) ultraviolence, the various psychic powers and puzzle designs lend themselves to very open ended solutions. One area has a pool of electrified water and a locked door needed to cross it. Options are: Use telekinesis to smash an acid container against the door, use telekinesis to "surf" on top of another object, or Mind Control to make the guard on the other side unlock the door.

The PC version was released by Midway as ad-supported Freeware, and was available on Fileplanet (but due to the latter site having been shutdown it's not down possible to download it from there anymore).

Since 2018, the game can be downloaded from majorgeeks.com using the following link: https://www.majorgeeks.com/files/details/psi_ops_the_mindgate_conspiracy.html

Has its own wiki here.

Not to be confused with Second Sight, another game with similar premises that came out in the same period.

Tropes used in the game include:

The Movement's master of telekinesis, Edgar Barret introduces himself by dropping a fuel tanker on his enemies and surviving the resulting fireball.

The Movement's master of telekinesis, Edgar Barret introduces himself by dropping a fuel tanker on his enemies and surviving the resulting fireball.