Removing the Head or Destroying the Brain 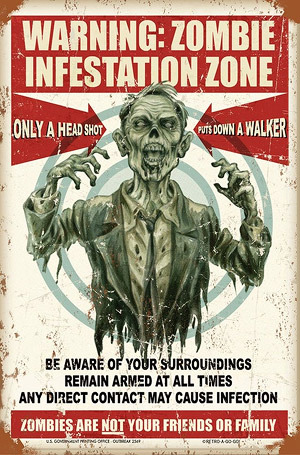 .
"Cut it out! Stop wasting your damn bullets, you jerks! You need to hit their heads! I told you! See, like this!"
— Zantoro, Hell of the Living Dead
Advertisement:

The ubiquitous "gotta shoot 'em in the head" scenario. For many different reasons, The Undead throughout fiction are vulnerable only to headshots. Kinda like how (many) vampires are only vulnerable to getting stabbed in the heart. Fortunately, removal of the head also works on people who are not a member of the walking dead, so you don't have to worry about it going out of fashion as a killing method. This may have a somewhat scientific basis: first, a zombie would have a lowered to nonexistent pain response, and would most likely not stop attacking until its nervous system has been effectively severed — since it is dead, pettier issues like "missing organs" or "blood loss" won't be as effective as they would be on the living. Second, mindless though they may seem, zombies logically have to still need brains to command to their muscles to walk, to analyze what their eyes send them, and thus know that there is a human to be eaten in front of them, etcetera. Accepting this rule is often a part of suspension of disbelief. If it doesn't work this way, and every part of the zombie can work independently of one another, you might find them Pulling Themselves Together. In this scenario, it's likely the only option is to Kill It with Fire.

Most songs about zombies tend to lampshade this trope.

He is rather fond of method #2.

Alternative Title(s): Remove The Head Or Destroy The Brain