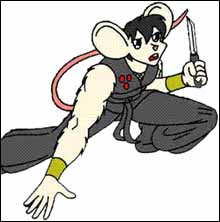 He slices, he dices, he juliennes!
Advertisement:

is a Furry Comic following the story of the rogue Ninja mouse Toshubi whose family has been killed by the feline army.

Although sadly with the last comic update being back in 2014 for April Fools and no updates about the creator's whereabouts it's safe to say that the webcomic is now an Orphaned Series.

Blade of Toshubi provides examples of: