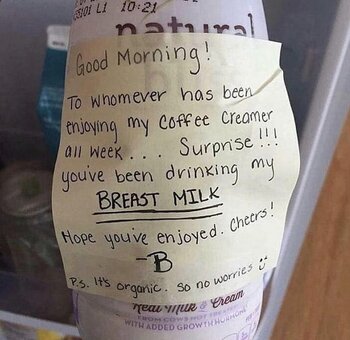 A character — usually a man — is a guest in the home of a woman with small children. He gets thirsty, opens the fridge, finds a container of milk, and starts drinking. Then, the homeowner comes along and informs him, "You're drinking breast milk."

Invariably, the character doing the drinking will be squicked out, and disgustedly spit out the milk. The audience's reaction will vary quite a bit more, considering how funny such scenes can be if done well, and the fact that in Real Life there are many people who have a Fetish for lactation, breast milk or both; not to mention that there's nothing inherently bad in breast milk in itself and (virtually) everyone drank it at some point in their lives anyway.

In Real Life, human milk is much, much sweeter than bovine or goat milk, and not as thick; the guy who was drinking it should have realized it wasn't what he thought it was without someone else telling him. After all, it's meant to be used for human consumption, far more than any other type of milk. It makes more sense if the milk is being used to complement coffee or breakfast cereal.

Usually a Comedy Trope. For obvious reasons, you'll see less of it the more kid-friendly a work is... it tends to pop up more in PG-13 or R-rated films and comedy series that are geared more specifically toward adult audiences. (Which is kind of odd, given that breast milk is mainly for children.)

Subtrope of I Ate WHAT?!.