Ruins of the Modern Age 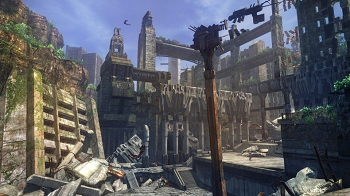 Want to make something set in the future? What better way than making it look like our current era has passed? Have all the trappings of our modern time fall into disuse and litter the landscape, possibly with nature beginning to reclaim it. Used to great effect in many After the End pieces. Related to Scenery Gorn and Ragnarök Proofing. See also Monumental Damage Resistance. For further down the line see Techno Wreckage.