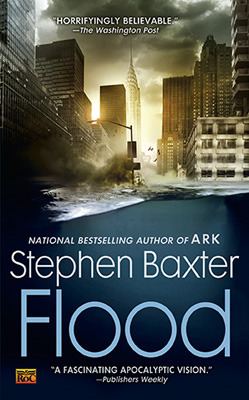 A series by Stephen Baxter about an apocalyptic global flood, based on the theory that there are deep subterranean reservoirs of water locked up in the Earth's mantle. What would happen if all this water started coming up out of the planet's core?
Advertisement:

The first novel, Flood, came out in 2008 and follows the lives of four Fire-Forged Friends who've been through a shared traumatic ordeal. They are still struggling to pick up the pieces of their lives when mysterious floods start happening all over the world. As the floods get even worse, they make a pact to always keep in contact with each other. This starts becoming exceedingly hard as the floods reach apocalyptic levels, threatening all of humanity.

A second novel, Ark, came out in 2009. Roughly picking up near the end of Flood, it follows the development of one of the secret "Ark" projects and its mission to preserve the human race. In contrast to the relatively grounded Flood, Ark is distinctly more sci-fi in nature, hewing closer to Baxter's usual content.

A trilogy of short stories followed the series, Earth two and Earth Three were published in Asimov's in 2009 and 2010, while Earth One was published alongside the other two in the collection Universes in 2013. Set 400, 1000 and 10,000 years after the novels they combine together to form a Distant Finale.

Not to be confused with the British Disaster Movie Flood, nor with the Halo Expanded Universe novel Halo: The Flood.