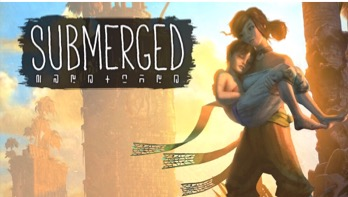 Submerged: Miku and the Sunken City

is a post-apocalyptic Environmental Narrative Game by Uppercut Games, which takes many cues from Shadow of the Colossus.
Advertisement:

Miku and her badly-injured younger brother Taku drift into a half-drowned city in their small motorboat. Leaving Taku resting at the base of a decaying clock tower, she sets off to find supplies to care for him. All under the scrutiny of the strange, plant-like inhabitants that seem to have designs on them.

Completely lacking any combat, gameplay consists of exploring the waterlogged city, searching for buildings to climb. Each building is something of a maze, with you having to figure out a path along the precarious ledges, hanging vines and other climbable surfaces to reach supplies, as well as pictographs that tell the story of the ruined city.

A sequel, Submerged: Hidden Depths, was released in April of 2022. Now Miku and Taku take the boat together to save the city from the Black Plant, the evil version of the Mass that had appeared in the previous game.

Available for iOs, Steam, Xbox One and Playstation 4.

I need to find tropes for Taku: