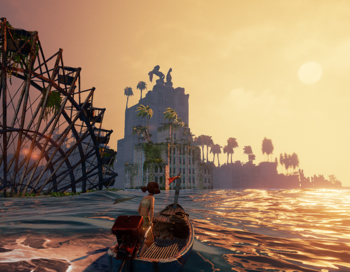 A time in the future where, for whatever reason, the Earth has become entirely or partially flooded by rising seas.

This kind of setting can be brought about by various reasons, although most involve some kind of natural or unnatural disaster. In modern fiction, this often takes the form of a Green Aesop about Global Warming, as potentially catastrophic rise in sea levels are a very real danger of greenhouse conditions melting the polar ice caps and sending their meltwater into the ocean. In more fantastical settings, this may occur in the wake of The Great Flood if the waters never recede.

The severity of the flooding often varies between works. More downplayed examples restrict the flooding to coastal areas and plains; these may become great drowned morasses or be entirely covered by wide shallow seas, leaving highlands and mountains above the waves, although usually still humid and swampy. In more extreme examples the entire planet can become covered by a pole-to-pole ocean, occasionally with a few islands poking through to mark the peaks of mountain ranges. However, works employing this angle tend to exaggerate the extent to which this can occur — if all the ice on the planet were to melt, this would "only" release enough water to flood most coastal plains and lowlands; covering all continental masses would require a lot more water than exists on Earth today, liquid or frozen alike, and while there have been times in the distant past when Earth's ice caps melted completely — most of the Mesozoic, for example — there was still plenty of dry land.

In more downplayed settings, humanity may be able to scrape along in the drowned lowlands, sometimes inhabiting the higher reaches of buildings or natural formations poking above the waterline, or may retreat altogether to higher ground. In the most intense cases of global flooding, survivors will often be forced to live on rafts, ships, and other waterborne vehicles drifting along the currents, although luckier sorts may be able to hold on in a City on the Water or an Underwater City. Either way, humanity will likely develop into highly nautical societies. Survivors will typically have to deal with intense resource scarcity, since all the stone and metal and forests are at the bottom of the sea, and remaining artifacts and technology will be rare and precious commodities. This often leads to a full-on Scavenger World if they come to rely on gathering flotsam or diving to submerged ruins for artifacts and materials. In cases where islands or other emerged lands exist, they'll either be the main refuge of society or semi-mythical promised lands the seabound survivors yearn to find.

A Sunken City or several is a common visual element. Depending on the severity of the flooding, these may be present as mazes of half-drowned buildings along the coasts, sometimes draped in plant life or inhabited by Disaster Scavengers, or as fully submerged ruins on the ocean floor.

Subtrope of After the End, Global Warming, and Single-Biome Planet. In regards to Apocalypse How, these events are of planetary scale but their level of disruption varies between works. Remaining civilization may be prone to Ocean Punk.

open/close all folders
Anime and Manga
Comic Books
Film — Live-Action
craft. Food plants and soil have also become rare and valuable luxuries. Myth claims that a single piece of dry land remains, and most of the movie follows a hunt for this island. In the end, it's revealed that the island exists — it's the tip of Mount Everest.
Literature
Live-Action TV
Tabletop Games
Video Games
Webcomics
Web Original
Western Animation
Real Life