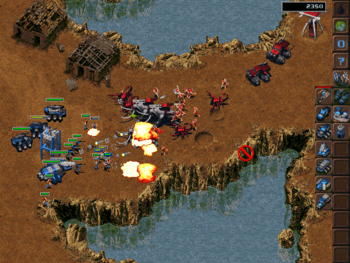 It is a war for land, for oil, for humanity... And, it is for keeps...
Advertisement:

Krush Kill n' Destroy is an aussie real-time strategy game made by Melbourne House in 1997. In the year 2079, all-out nuclear war reduced the world to cinders. A group of survivors, appropriately called the Survivors, lived underground for decades until 2141 whereupon the emerged to find the Evolved, a group of mutated humans with a tribe-like social structure. The two groups immediately take a disliking to one another, and war begins anew.

The game was notable for its silly sense of humour, not taking itself seriously at all. The expansion pack, KKnD Xtreme, added more missions and enhancements. The sequel, KKnD2: Krossfire, was released in 1998 and introduced a third faction, the Series 9 robots. It takes 40 years after the first game, revealing that the Survivors lost the first conflict and that they had to call for reinforcements that are only now arriving.