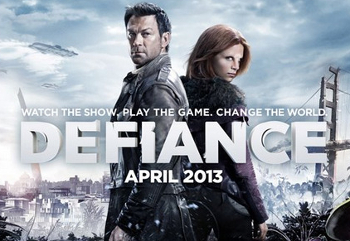 "When I was a little girl, Nolan liked to say that this world has no natives, which means it belongs to everyone."
— Irisa, "Pilot"
Advertisement:

Defiance (2013—15) is set on 2046 Earth, badly damaged from a war with alien colonists called Votans and continued bombardment by the wreckage of their ships. The Votans are a loose alliance of seven species from multiple planets in the Votan solar system, whose sun has gone nova. The Pale Wars started when they arrived at Earth seeking shelter and were refused, and ended when soldiers on both sides gave up fighting out of disgust at the pointlessness of it, and set about rescuing the civilians caught in the cross-fire. The series takes place in a settlement named Defiance built on what used to be St. Louis. The town of Defiance is inhabited by both humans and Votans, in a tenuous state of coexistence. Planet Earth's environment has been drastically altered and filled with alien flora and fauna by the terraforming equipment that crashed when the Votan spaceships were mysteriously destroyed during the war.

The show has a rather novel approach in that it was developed alongside a Massively Multiplayer Online Game, also called Defiance. While the game is set in the San Francisco Bay area in California and the show is set in the remains of St. Louis, Missouri,note about 2000 miles apart they did acknowledge each other occasionally.

After only four episodes, the show was renewed for a second season, which consists of 13 episodes. It was then renewed for a third and final season, being cancelled as of October 16, 2015. The game was shut down on April 29, 2021.