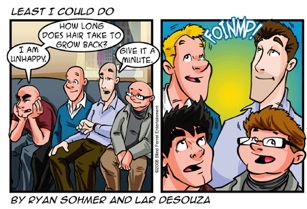 Bald to Beautiful in 1.0 Panels!
"Don't you love a 'do that always bounces back?"
— Barbie, Barbie: Life in the Dreamhouse
Advertisement:

A character whose potentially complicated hair is drenched, burnt, or otherwise misshaped merely has to shake their head to return it to the proper shape and volume. In extreme situations, this requires a few seconds of combing.

Happens in live action, but usually done with a cut-away.

Subtrope of Rapid Hair Growth. Either the supertrope to or the positive version of Stubborn Hair. Contrast with Important Haircut, Expository Hairstyle Change, and Close-Call Haircut. Compare Reset Button and Beauty Is Never Tarnished but just for hair. May involve Compressed Hair, which depending on the scenario may or may not be realistic. May enforce Hairstyle Inertia, where a character's hair remains exactly the same throughout their life. Compare Improbable Hairstyle Sequence.

Not to be confused with a hypothetical Continuity Reboot of Hair, nor with the hair of characters from ReBoot.