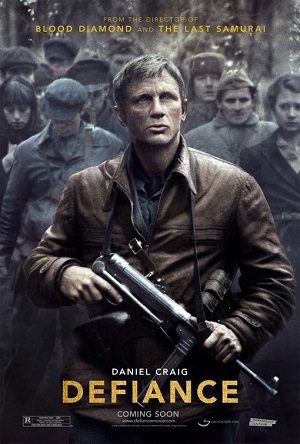 "Every day that we survive is an act of faith."
"Welcome to our... community."
— Tuvia Bielski
Advertisement:

Defiance is a 2008 film directed by Edward Zwick, who co-wrote the movie with Clayton Frohman, based on a book (Defiance: the Bielski Partisans) by Nechama Tec. It stars Daniel Craig, Liev Schreiber, and Jamie Bell (of Billy Elliot fame). It follows the Bielski brothers, four Belarusian Jews who escape the first wave of SS murders in late 1941, only to decide that they need to fight back. The resulting resistance group grows, taking in more and more displaced Jews, until it is a genuine thorn in the side of the Nazi advance, forcing the Germans to retaliate.

Not to be confused with the show or video game of the same name.