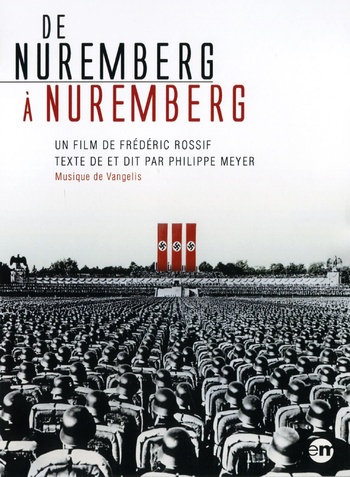 De Nuremberg à Nuremberg (From Nuremberg to Nuremberg) is a 1989 French documentary in two parts directed by Frédéric Rossif (who made To Die in Madrid in the same vein before) and narrated by journalist Philippe Meyer, with a soundtrack by Vangelis. It is mostly made of archive footage, all in black and white.

It broadly chronicles the history of Nazi Germany from its rise to its fall, including of course World War II and The Holocaust. Some parts focus on the War in Asia and the Pacific, but the documentary's heart is mostly about the way Adolf Hitler reshaped Germany, the war he waged in Europe and eventually lost, the devastation and atrocities that came with it and its immediate aftermath when the defeated regime's surviving leaders faced justice.

The film opens with imposing national-socialist party rallies and agressive speeches by some the party's heads in Nuremberg in 1934 and ends with the trials that took place in the ruins of the same city in 1945-1946 (hence the title).