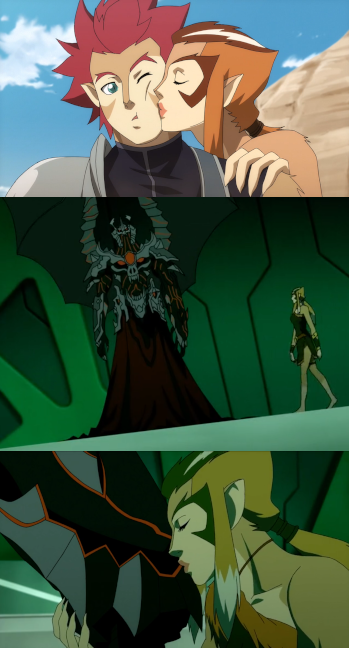 "You may be my king, but he is my master."
"I, for one, welcome our new computer overlords."
— Ken Jennings on Jeopardy!, paraphrasing Kent Brockman after the Watson A.I. won
Advertisement:

Living under the heel of a despotic Evil Overlord and his Empire is no picnic even for those blind to their tyranny. No surprise then that La Résistance does everything it can to make his reign difficult. Luckily, what La Resistance lacks in numbers it makes up for with loyal grassroots support from the oppressed people because The Revolution Will Not Be Vilified. No matter how good the tyrant's publicity, only the foolish believe him and all the people that matter help La Resistance.

Except, of course, for Les Collaborateurs. Why fight against an occupying power which empowers your people, promotes your worldview, is at least marginally more efficient at running your country than you are, was clearly strong enough to conquer your home in the first place, can't be ejected from your country now that said regime won that campaign, or can only be ejected at a price you're unwilling to pay? The French State cited all of these reasons, and more, when defending their decisions to give Nazi Germany a quarter of their GDP (including their entire armaments output) and most of their Jewish populationnote  First priority for Collaborateurs was to give Jewish refugees from other countries. Many French Jews survived, not because Collaborateurs spared them but because while some Résistants blew up trains, other organised escape roads for Jews. French anti-Jewish hatred was actually rooted in cultural, not racial, posturing. European Catholic immigrants to France tended to assimilate into "superior" French culture fairly well (France had significant ethnic minorities of Celts, Basques, Italians, and Germans). But Jews tended to retain their religion and at least a few cultural trappings, something profoundly upsetting to the notion that French Culture and French Values had a universal and irresistible appeal (a major reason for their distrust of US culture in turn, which made similar claims). The "Dreyfus Affair" and the railing against PM Léon Blum (head of the Socialist-Communist Parliamentary Coalition of 1936) were pretty clear illustrations of the open anti-Jewish feeling that predominated in early C20th France — though Blum's case is a little less clear-cut since he was a socialist in league with communists, which gave French people three reasons to hate his guts. during World War II. In most fictional media, of course, these kinds of people don't exist.

Then there are the perks,note such as the lucrative contracts offered to French automobile and aeroplane manufactures that resulted in them giving 92% and 100% of their 1941-44 output (respectively) to the Wehrmacht, which are of course your only reasons for collaborating in a work of fiction. Helping out can give you money, power, sex, and most important of all: revenge against all those pretty popular kids that just joined La Resistance! Les Collaborateurs can act as The Mole, spreading and gathering intelligence, as saboteurs within the resistance by undermining their own efforts, or as an agent of distrust and discord to break apart The Alliance. Les Collaborateurs are only too happy to sell out their countrymen like animals to the slaughter, even if signs point to the villain having a penchant for killing collaborators.

Usually they're unctuously Smug Snakes, low grade Magnificent Bastards, Evil Reactionaries, or even Trolls. And no, these guys will not end up Becoming the Mask or doing a Heel–Face Turn — they've tasted power and found it sweet. You can, however, expect them to think that their utter betrayal will somehow make The Chick insanely attracted to them (Love Makes You Evil meets Go-Go Enslavement). Thankfully, the cosmic sense of justice ensures that all collaborators become Asshole Victims meeting with particularly grisly Karmic Deaths, because Treachery Is a Special Kind of Evil.

In Real Life, it's often a murkier picture. Ordinary, upstanding citizens across the world "collaborated" to greater and lesser extents with Axis occupation, for instance, and many of them didn't really agree with Fascist/Nazi/Greater East Asia ideology or the policies they helped implement; they were just trying to survive. Others were maligned for simply fraternizing with the invaders to any extent. And then there were the peoples who had been denied (sometimes forcibly) their right to self-determination, so they didn't consider the existing nation-states their own even prior to German invasion. After the war, it was common practice in France to shave the heads of women who loved and/or had sex with Germans (whether as wives, lovers, or prostitutes) so ordinary people who didn't know them personally could help pitch in and team up to make their lives hell for their perceived 'treachery' and (supposed) sexual promiscuity. While there were a good twenty thousand illegal/informal/impromptu executions of collaborators during the Liberation of France, and most collaborationist captains of industry had their assets nationalised or were formally tried and executed, French collaborators in positions of authority were virtually all unpunished. Even François Darlan, second-in-command to Marshall Pétain, switched sides without consequence before he was assassinated by Fernand Bonnier de La Chapelle , a French Resistance member. Maurice Papon, organiser of the Holocaust in Bordeaux, went on to have a long and distinguished career organising the killing of yet more 'anti-French' elements in French North Africa and Metropolitan France before finally being tried for his role in the Holocaust in the 1980s.

If a member of Les Collaborateurs is given a position of power or influence over the conquered people, then he becomes The Quisling.

Compare The Remnant and Voluntary Vassal. This trope is the villain opposite of La Résistance, and the government they collaborate with is The Empire. When they are on the battlefield (willingly or not), they are Battle Thralls. If collaborators work for a superhuman/inhuman power with the hope of being uplifted to the same status themselves, see Transhuman Treachery and Vampire Vannabe.

When Zurg takes over the quaint little plant of Roswell, this opportunistic Major applies for a role. Zurg likes the cut of his gib.

When Zurg takes over the quaint little plant of Roswell, this opportunistic Major applies for a role. Zurg likes the cut of his gib.