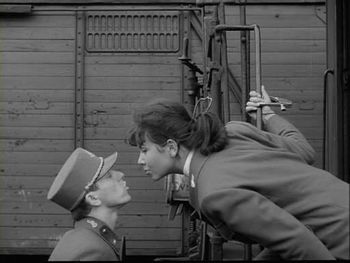 Closely Watched Trains (in Czech Ostře sledované vlaky), is a 1966 Czech film by Jiří Menzel, based on a short novel of the same name by famous Czech writer Bohumil Hrabal. It has won several international awards, including an Oscar for Best Foreign Film in 1967. It merges a typical Coming of Age Story with large amounts of humor and a somewhat uncommon war story.

The setting is the latter stages of World War II, as the Allies are closing in on Germany from the west and the Soviets from the east, but Czechoslovakia remains under Nazi occupation. Miloš Hrma is a young Czech with one big ambition in life: To become a train dispatcher so that he can lead a leisurely lifestyle with little work. So he starts working at the local train station, where he meets train dispatcher Hubička, who divides his time between lazing around and hitting on the telegraphist, and the station master, who seems more interested in his geese and in condemning Hubička's exploits than the train service. Meanwhile, Miloš' girlfriend Máša wishes to take their relationship further. Finally, the occupation forces pressure the people at the station to keep a close eye on all passing trains to prevent partisans taking out supply trains.

Sadly for Miloš and Máša, they seem to be unable to consumate their relationship at first, and when they actually get the chance to spend a night together, Miloš fires off prematurely. Depressed, he considers himself not to be a real man and tries to commit suicide, but is brought to hospital before he bleeds to death. There, a certain Dr. Brabec explains to him that his "performance problems" are fairly common at his age, giving him some hints on avoiding this and proposing he seek the aid of a mature woman to overcome his anxiety.

Meanwhile, as all of that silliness is going on, it turns out that Hubička the cheerful dispatcher is working with La Résistance.