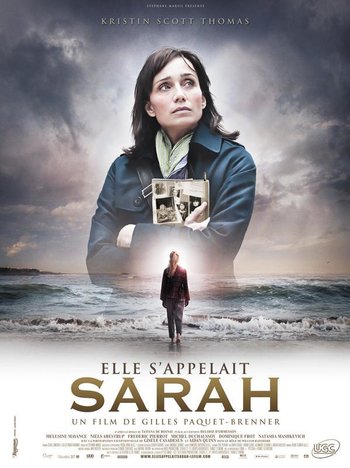 Sarah's Key (French: Elle s'appelait Sarah) is a 2010 French drama by Gilles Paquet-Brenner, adapted from the novel of the same name by Tatiana de Rosnay.

Julia Jarmond (Kristin Scott Thomas), an American journalist who lives in Paris with her French husband and daughter, is tasked with investigating the Vel' D'Hiv roundup, a 1942 event in German-occupied Paris where thousands of Jews were rounded up and forced to stay in appalling conditions in the Vélodrome D'Hiver until they could be deported to German camps. The film simultaneously follows the story of Sarah Starzynski, a young Jewish girl who in 1942 is arrested with her parents during the roundup. They are taken to the Vel' D'Hiv, but not before Sarah locks her younger brother in a secret wallspace to keep him safe from the Germans, promising to return shortly to free him. Julia Jarmond will discover in the course of her investigations that her and Sarah's lives are intertwined.