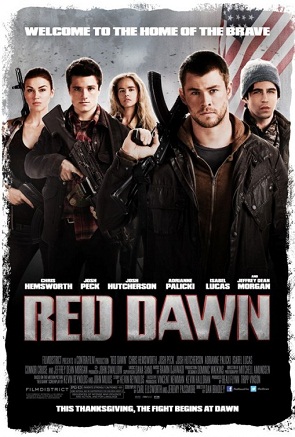 The North Korean military has invaded the city of Spokane, Washington with the help of EMP weaponry. After seeing his father executed by Captain Cho (Will Yun Lee), Iraq veteran Jed Eckert (Chris Hemsworth) joins up with his younger brother Matt (Josh Peck) and several of his high school classmates to form the Wolverines, a guerrilla resistance group.

The film is notable for its Troubled Production. At first, the remake replaced the Soviet Union with the People's Republic of China. The Chinese villains were later replaced

by North Koreans. Images had to be digitally altered and Chinese dialogue dubbed over to fit this change. The official reason for the change was that North Koreans would make more menacing villains, but most commentators believe that the change was to avoid angering the Chinese government, that limits the number of import films from the United States each year (and would give the slot to another film). Additionally, industry experts pointed out the obvious that even with distribution permission, Chinese audiences would be less inclined to watch a movie that clearly demonized their troops (in previous decades, Soviet cinema casting the American military as villains haven't made it to the US for similar reasons).

The remake was originally meant to be released in 2010. However, due to financial problems at MGM

, it seemed like the film's release would be delayed indefinitely. Ironically, the film's only hope seemed to be a loan from China

. The remake finally picked up a distributor and was released in 2012

Despite a striking number of parallels (both fictional and real life), no connection exists between this and the video game Homefront.

Tropes of the Brave: