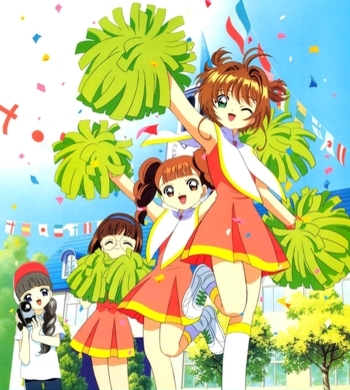 The problem with spectator sports is that the spectators are pretty powerless. Why stay invested in a contest when the only participants you like are clearly doomed to lose it?

But you're not completely powerless. You can't run on the field yourself but you can still help the team and the team needs you! Come, let them hear our support!

This is the job of the Pom-Pom Girl. When the home team's down, when the champ is getting beat around and the fans are losing interest, she draws their attention through dance and acrobatics then works them up into joining her in support of her charge. They still have a chance! Let them know it! The Pom-Pom Girl keeps the spectators engaged, gives them the belief that they can influence the contest they are watching. When the heroes make that successful comeback, fans will be inspired to come back for more and if not, then hopefully she at least let them have some fun even though the favorite they came to see lost.

The Pom-Pom Girl is a Stock Character and often Truth in Television. Though she does not always carry pom-poms and is not always female, the image of a perky dancer with pom-poms and the chants they tend to inspire are recognizable enough that they often appear outside of the intended cheerleading role. There are sporting events where pom-pom squads have no players to support and simply compete with each other to draw the best crowd reactions or judge's scores. Girls may also dress in frills and hold pom-poms for a special occasion like Halloween or in attempt to cheer someone up. As long as she looks or acts the part it counts, go trope!

In most highschool settings, she'll usually be the star quarterback's girlfriend, or actively crushing on him. And she's just as likely to be at odds with the Cruel Cheerleader (her antagonistic counterpart) because of it. That said, there's no reason an antagonist can't have cheerful pom pom squads of their own, especially not if they have good publicity or are legitimate competitors.

Compare Perky Female Minion, The Face, All Guys Want Cheerleaders, All-Cheering All the Time. For sources of inspiration outside of competitive events, see The Muse and Manic Pixie Dream Girl.