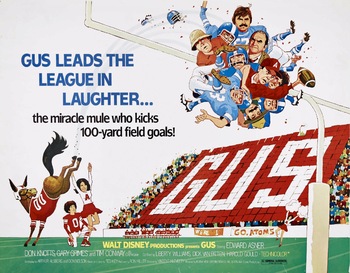 The film tells the story of Andy Petrovic, a young Yugoslavian boy who discovers that his mule Gus has the astounding ability to kick any kind of ball up to 100 yards when Andy says the Yugoslavian word "Ojigdz". A newspaper article about the phenomenon soon piques the interest of the California Atoms, an inept pro football team looking for a novelty stunt to draw fans.

Last film appearance for Bob Crane, who plays an announcer.

Tropes found in Gus include: