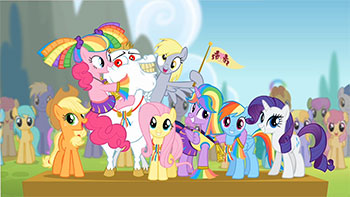 The qualification round for the Equestria Games is a few days away, and Rainbow Dash is attempting to motivate Fluttershy and Bulk Biceps to help them qualify Ponyville for a relay race. However, while Rainbow Dash is a natural athlete, Bulk and Fluttershy assuredly aren't, despite their best efforts. The rest of the Mane Six go with the three-pony team to the competition at Rainbow Falls, with the Wonderbolts Spitfire, Soarin, and Fleetfoot competing for Cloudsdale. The Wonderbolts are proud to have some worthy competition from Rainbow Dash, but Rainbow's spirits soon sink when she realizes how hopelessly outclassed her teammates are against her heroes.

During practice, Soarin injures his wing and has to be taken off the practice field to rest. With him gone, Spitfire and Fleetfoot offer Rainbow Dash a chance to practice with them, since she grew up in Cloudsdale and has proven herself to be an exceptional flyer. Rainbow agrees, splitting her time between practicing with the Wonderbolts and trying to motivate her friends. Twilight catches on to the deception and confronts Rainbow about her two-timing. Just then, Spitfire and Fleetfoot show up and offer Rainbow the chance of a lifetime: since Soarin's wing is too injured to compete, Rainbow Dash can fly with them permanently to help them qualify — but if she accepts, it means Ponyville's chances of qualifying for the games will be slim to none. With the competition the next day, Rainbow begs Twilight for advice, but Twilight tells her she must make a decision on her own, and fast.

Not long after, Rainbow Dash arrives on the practice field in a wheelchair, covered in bandages and very badly acting out pain, claiming she "tripped and fell". Rainbow is taken to the hospital, where all of her friends encourage her to get better and tell her not to worry, since they'll make sure to give Rainbow a medal if they win the gold in the Games — they even got Derpy to replace her! Soarin, in the next bed over, compliments Rainbow on what good friends she has, remarking that his teammates never came to visit him even though his wing is feeling better. Realizing the Wonderbolts lied to try and push her to be on their team, Rainbow Dash leaves the hospital and reveals her deception to both teams. She announces her decision to retake her place on Ponyville's team, convincing the Wonderbolts to accept Soarin back onto their team in time for the qualifying round.

During the time trial, Cloudsdale easily qualifies with the Wonderbolts. Thanks to the combined work of Bulk, Fluttershy and Rainbow Dash, Ponyville also (barely) qualifies. Everypony receives a medal, with Spitfire giving her Wonderbolt collar pin to Rainbow as well. Back in Ponyville, Rainbow writes in the Mane Six's diary that, as much as she loves winning, she loves her friends way more. As she leaves to go be with her friends outside, the Wonderbolt pin lets off an iridescent rainbow shimmer...