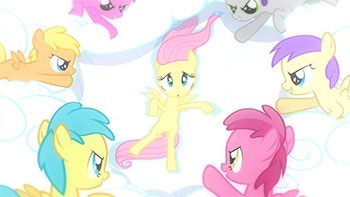 At an all-pegasus meeting, Rainbow Dash announces that Ponyville's reservoir has been chosen this year to supply Cloudsdale with the water for all the rain for Equestria — and Ponyville's pegasi will get the water from the ground to Cloudsdale by flying together and making a tornado of at least 800 wing power. Every capable pegasus in Ponyville is needed to help (including the Running Gag of a huge, beefy, enthusiastic stallion with disproportionately small wings). Rainbow Dash wants Ponyville to break the record of 910 wing power set by Fillydelphia the previous year with a hurricane of over 1,000 wing power! Everypony's cheering is marred by a little coughing.

As training begins, Rainbow Dash watches over the proceedings, providing encouragement and scolding the coughing ponies for attempting to malinger. Fluttershy is conspicuously absent — she's at home, faking being sick and injured. Rainbow Dash spots the ploys and forces Fluttershy to admit the real problem: she was humiliated by her weak flying in front of the other young pegasi at Flight Camp, and now she feels a crippling sense of performance anxiety. Rainbow tones down her usual brash approach and reminds her friend how important their mission is. Fluttershy agrees to try despite her obvious misgivings.

Twilight brings an anemometer to the training grounds to test pegasus wing power. When it's Fluttershy's turn, she makes a valiant effort but when she hears laughter from twin pegasi on the sidelines, it causes her to flashback to being teased:

Fluttershy falters, resulting in a miserable score of 0.5. She runs off in tears. Rainbow Dash tries to bolster her spirits, but Fluttershy's nerve has failed. Alone with her animal friends, however, she musters up her courage and begins practicing on her own. When she returns, her wing power has improved significantly — but it is still only 2.3 which is well short of the 10.0 goal Rainbow Dash has set for all pegasi. Though both Rainbow and Twilight commend her for her significant improvement, Fluttershy still feels humiliated and runs away yet again.

On the big day, Spitfire of the Wonderbolts shows up to oversee the proceedings and witness the record-breaking attempt. Unfortunately, it turns out the coughing fits were genuine — eight ponies are out with the feather flu! Not only does this mean they won't beat the wing power record, but they might not even lift the water to Cloudsdale. Determined to overcome these setbacks, Rainbow Dash and the Ponyville pegasi start the tornado only to fail due to a mid-air crash. Despite Twilight's warnings that she's endangering The Team, Rainbow Dash rallies everypony to try again. They build a tornado of 795 wing power — five short of the minimum needed. Twilight urges Fluttershy to help, but Fluttershy says her measly strength is too little to make a difference. When Twilight convinces her to try not just for Rainbow Dash or Ponyville, but for herself, the meek pegasus takes flight and enters the maelstrom.

In mid-flight, Fluttershy's memories of being teased strike again, but she refuses to let them stop her, pushing herself past her limits. The sight of Fluttershy's determination encourages the other pegasi. Together, they generate just enough wing power to propel the water to Cloudsdale!

Spitfire congratulates Rainbow Dash, who graciously steps aside and gives props to Fluttershy, her number one flier! Everypony begins to chant:

Fluttershy narrates her letter to Princess Celestia from the shoulders of everypony: "Sometimes you can feel like what you have to offer is too little to make a difference. But today, I learned that everypony's contribution is important, no matter how small. If you just keep your head high, do your best, and believe in yourself, anything can happen!" YEAH!