Recap / My Little Pony: Friendship Is Magic S1 E21 "Over a Barrel" 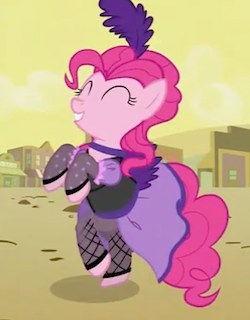 Lili von Shtupp she ain't.
Rarity: Applejack! Were you reading a bedtime story to an apple tree?
Written by Dave Polsky
Advertisement:

And now for somewhere completely different. We open with the ponies riding a train (pulled by ponies, no less) out into the Wild West as Applejack fondly reads a bedtime story.... to a tree. Rarity is not amused by this, or the fact that "Bloomberg" gets an entire cabin all to himself. And why are our little ponies on a train with a tree in the Wild West you ask? To deliver said tree to a new settlement founded by Applejack's relatives as a gift!

After the the title credits play we cut back to the train at night time. While Spike & Rarity try to go to sleep, the rest of the cast have a thoughtful discussion on whether or not Fluttershy is a tree. Spike decides he can't take it and bunks with Bloomberg in the other cabin, apologizing in advance for any snoring he may do. Morning comes and well would you look at that! A herd of buffalo! They have amazing feather accessories! And they're getting close to the train! Really close!

Close enough, in fact, they start side-ramming the train (and the ponies pulling it). When that doesn't stop the train, a small female buffalo hops on top of the train and heads to the back cabin where Bloomberg and Spike (who's sleeping through all of this) are. Rainbow Dash attempts to stop the buffalo girl. She fails. Buffalo girl detaches the cabin with Bloomberg and Spike (who's now awake and screaming for help) and the buffalo get away. Rainbow decides to go after the accursed dragon-nappers while suffering from a headache.

The train reaches its destination and Applejack, Twilight, Rarity, and Fluttershy are instantly greeted by AJ's cousin Braeburn who's all too happy to show them the sights and wonders of APPLELOOSA! After getting a full tour of the town, much to their dismay, Twilight and Co. explain to Braeburn that Spike & Bloomberg have been kidnapped by buffalo, Rainbow Dash went off after them, and Pinkie Pie disappeared off-screen. Braeburn explains that the local buffalo have been causing them trouble for quite some time and want the town's prized apple orchard gone.

Meanwhile Rainbow Dash is using stealth espionage action to locate Spike and get back at the buffalo girl. No one tricks Rainbow Dash and gets away with it! She runs into Pinkie Pie out of nowhere. They start to argue, and then buffalo show up out of nowhere. And Spike! He's all right.

As it turns out, Spike has become bros with the buffalo. He introduces them to Little Strongheart, the buffalo girl that kicked Rainbow Dash's tail earlier, and Chief Thunderhooves, the tribe's leader. They explain to Dash and Pinkie that the Appleloosa ponies have planted their orchard all over their sacred stampeding grounds without their permission. Rainbow Dash agrees and declares they have some apple-picking Appleloosians to talk to.

The next morning, the Appleloosa gang are all set to hike deep into buffalo territory to rescue their friends. They take 10 steps out of town to find Pinkie, Dash, and Spike right there. Group Hug and nuzzles are exchanged, and Rainbow reveals they've brought their new friend Little Strongheart to explain why the Appleloosans should move their apple orchard. Applejack tells them that Braeburn would like to explain why the trees should stay (because the grove is on the only farmable land in the area). Rainbow and Applejack start arguing for them. How will they resolve this conflict? Fear not, for Pinkie Pie the pretty party pony has the perfect plan.

This plan is to dress up in an adorable showgirl outfit and sing a song about sharing and caring to everypony (and everybuffalo). It…doesn't go over well.

Chief Thunderhooves: It seems the sheriff and I have come to an agreement... that was the worst performance we've ever seen.

Chief Thunderhooves declares that on the next day at noon, if the apple trees aren't gone, they'll stampede them and the whole town into the ground, and the town's sheriff tells him they'll be ready for a fight. Preparations for the battle are made, despite our heroines trying to persuade both sides otherwise. Noon comes and Thunderhooves begins to reconsider his decision. Perhaps there is another way than fighting a war…

Apple pies are thrown, buildings collapse, and Chief Thunderhooves is struck down by an apple pie to the face. The fighting stops briefly and there is mourning…until a piece of the pie lands in Thunderhooves's mouth, instantly springing him to his hooves and says he has a better idea than fighting.

The buffalo allow the apple orchard to stay in exchange for a path to be cut through it and a share of those delicious apple pies. Bloomberg is finally planted in his new home and everyone is happy. Twilight Sparkle's letter to Princess Celestia states that with compromise and understanding, even the greatest of enemies can become friends. You've got to share, you've got to care...