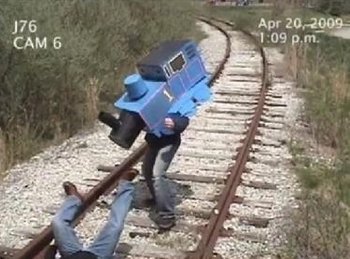 Shocking footage of a man hit by a train.
Tigger: Say, where's the propeller on this thing?
Rabbit: Tigger, trains don’t have propellers, although it does seem to be missing its rudder.
— The New Adventures of Winnie the Pooh, "The Good, The Bad, And The Tigger"
Advertisement:

These are the examples that make Casey Jones turn over in his grave.

Just like works that are Just Plane Wrong, many writers just don't do the research when it comes to railways, locomotives and rolling stock.

Easily, the number one mistake is showing a steam locomotive without a tender or bunker and tanks — which usually means that it doesn't have any fuel or water and therefore can't move. And even if there is a tender, it often looks like one big fuel bunker on wheels with nowhere to put the water. Other common departures from reality might involve a Runaway Train's safety systems failing without any justifiable reason, or the wrong kind of train or rolling stock for the script. Whenever a train appears, it'll almost always be blasting its horn or whistle (if even that, as sometimes they'll use whistles on diesels and horns on steam engines and vice-versa), when in real life trains are only meant to sound their horns and/or whistles at set points along the route such as at level crossings, or if there's something or someone on the track. But, hey, most viewers don't know or care what the proper train would look like, or the ins-and-outs of railway operations.

Cases of anachronistic locomotives and rolling stock are more forgivable, for most of the same reasons given in sister tropes involving ships, aircraft or armoured vehicles. Sometimes there are simply no serviceable examples still in existence, or the surviving examples are stabled at preserved railway lines far from their original area of operation and are too expensive to transport, leaving the production team to choose between this trope and California Doubling. Even when you manage to make locomotive and rolling stock match the period and the location, they're often in a livery from an earlier or later period of their service lifespan, and the owners may well be reluctant to have them repainted for filming, especially considering the expense involved. They figure that only weird railroad nerds will notice anway.

Compare Steam Never Dies, which often involves steam locomotives still running as commonplace in the modern era when they've explicitly stopped being used. Contrast Cool Train. Not to Be Confused with something you do to one of your students as a joke, that's Sabotutor.

Alternative Title(s): Did Not Choo The Research