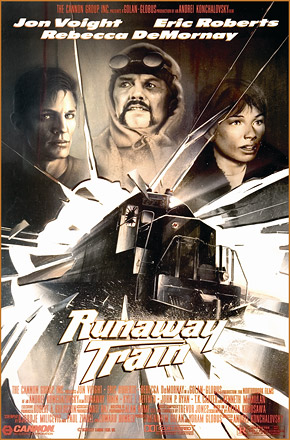 Eddie: Hey, Barstow. Why don't you stop her? You put the system in. Cost the company 4.5 million.
Barstow: Listen, Eddie. This system is designed for the efficient dispatching of trains when manned, not to stop them when they're unmanned. The brake shoes have burned off. The over-speed control must have gotten screwed up from the collision!
Advertisement:

The film tells a tale of two convicts, Oscar "Manny" Manheim (Jon Voight) and Buck McGeehy (Eric Roberts), who escape from an Alaskan prison and stow themselves away on a train. Unfortunately, the engineer dies at the throttle and their ride to freedom becomes a brakeless runaway train. While the train races across the snow-covered landscape, they come across remaining railroad worker Sara (Rebecca De Mornay) who warns them that the track they're on leads to certain doom. The three of them now must work to either stop or slow the train. Complicating things are the railroad company looking to derail the train before it causes any casualties along the line, and ruthless prison warden Ranken (John P. Ryan), who holds a grudge against Manny and quickly figures out where his two escaped convicts have gone...

This film was originally supposed to be directed by Akira Kurosawa as his English-language debut. It didn't happen (and Kurosawa never directed an English-language film), and over 20 years rolled by before it was made. Kurosawa got a story credit. As well, legendary crime author and ex-convict Edward Bunker wrote the final draft of the script, as well as playing a minor role as a prisoner.