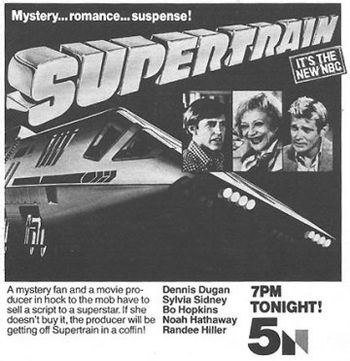 It's the new NBC!
"You're letting your psychotic fascination with railroads lead you into a suicidal gamble for the future of this company!"
— Unnamed Corporate Executive, "Express to Terror" note This was in the opening of the first episode.
Advertisement:

Hour-long comedy-drama series which debuted as a Midseason Replacement in 1979 on NBC. An attempt at emulating ABC's success with The Love Boat, Supertrain was essentially the same show with the Pacific Princess swapped out for the titular "Supertrain", a super-broad gauge, nuclear-powered bullet train that could cross the United States from coast to coast in 36 hours.

The show was an abject disaster for NBC, who had produced the series by itself (initially with Dan Curtis in charge) and spared no expense in building both the elaborate sets and the complex, fragile model trains (one of which crashed during production and had to be replaced at great cost). Worse yet, once the series premiered, viewers simply weren't interested; attempts to retool the series by adding more suspense elements failed, and the series left the air in July 1979 after just five months and nine episodes.

It's often been named the biggest flop in US television history, not just because of the derivative content but because it (combined with the US boycott of the 1980 Moscow Olympics) came so close to taking NBC down with it. It's never been released to syndication or home video, and this is unlikely to change anytime soon.

“So you think it’s a gamble, do you? Well, gentlemen, since I can count my remaining years on the fingers of one hand, from my point of view, it’s not much of a gamble at all.”