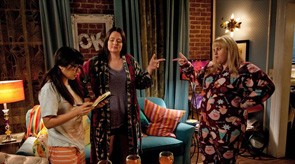 These ladies know how party.
Created by and starring Rebel Wilson, of Pitch Perfect and Bridesmaids, Super Fun Night is a comedy about a group of friends routinely planning a... Super Fun Night.
Advertisement:

It also stars Liza Lapira from Don't Trust the B* as basically the same person and Lauren Ash, who had a two-series run on The Dating Guy.