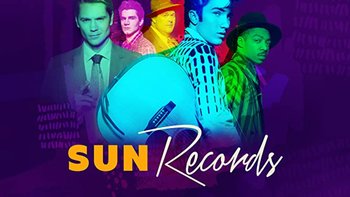 Sun Records is a historical drama miniseries aired on CMT, set primarily in 1950's Memphis, Tennessee. It is based on true events as interpreted by the Broadway musical Million Dollar Quartet.

The show opens with Sam Phillips (Chad Michael Murray) moving to Memphis in pursuit of a dream: his own record label, one that will define the music of the modern age. He believes that somewhere in the city is an undiscovered talent that will make his dream a reality. Little does he know that rising star will find him instead...an unknown teenage boy named Elvis Presley (Drake Milligan).

The audience follows the tumultuous life of Phillips and his assistant/partner Marion Keisker (Margaret Anne Florence) as they cross paths with the most memorable music legends of the mid-20th century, as well as the everyday lives of the ones he has yet to meet. It also features eccentric radio host Dewey Phillips (Keir O'Donnell) (no relation to Sam), talent manager "Colonel" Tom Parker (Billy Gardell), and a host of other music-industry figures of the period.

The series premiered February 23, 2017 on CMT, for a total of eight episodes.