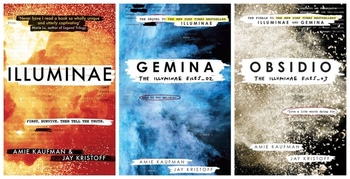 "Live a life worth dying for."
—Kady Grant, Obsidio
Advertisement:

A trilogy of Science Fiction novels by Amie Kaufman and Jay Kristoff. The Illuminae Files are set up as a collection of documents about three major events in the plot. Unreliable Narrator is in full play here, as the majority of the documents are "video files narrated by an analyst," who is later revealed to be one of the main characters.

Our main characters are Kady Grant, Ezra Mason, Hanna Donnelly, Nik Malikov, Ella Malikova, Asha Grant, Rhys Lindstrom, and AIDAN. Only Kady, Ezra and AIDAN appear in the first book, Illuminae. Kady, Ezra, AIDAN, Hanna, Nik, and Ella are all in Gemina, the second book, and for the finale book Obsidio, everybody appears.

Several of the characters are romantically involved, especially Ezra and Kady, who broke up during the attack on Kerenza only to get back together during the events of the first book.

The series consists of three main novels and one prequel novella: