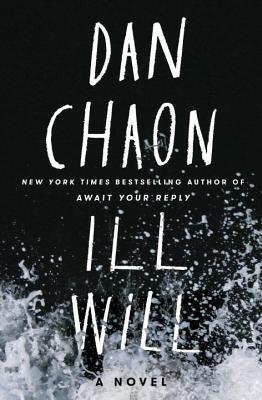 Ill Will is a Psychological Thriller/Horror novel written by Dan Chaon and first published in 2017.

In 1983, Dave and Colleen Tillman were murdered, along with Dave's brother and his wife. Suspicion soon fell on Dave and Colleen's adopted son, Rusty. Rusty was a scary kid, into heavy metal and devil worship. The testimony of his adopted brother Dustin and cousin Kate, one of the other couple's twin daughters, helped get him a lifetime sentence for murder.

Thirty years later, the Innocence Project helps to get Rusty's conviction overturned and he's released from prison. Dustin, now widowed and a therapist living in Cleveland, is disturbed at the thought of Rusty back out in the world. What will he want? What could he still do? Falling in with his new patient Aqil Ozorowski, Dustin begins an investigation of Jack Daniels, a potential serial killer thought to be responsible for the drowning deaths of a number of college-age men. Meanwhile, Rusty reaches out to Dustin's sons Dennis and Aaron. Whatever his intentions toward the two younger men, they are already on a dark path. Aaron, in particular, is experimenting with harder drugs, and looks into a troubling case on his own when his junkie friend Rabbit disappears.

No relation to the freeware RPG Maker horror game of the same name, which was released in 2012.

Ill Will provides examples of the following tropes: