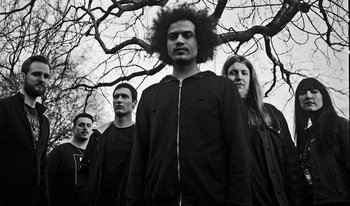 L-R: Marco von Allmen, Tiziano Volante, Denis Wagner, Manuel Gagneux, Marc Obrist, Mia Rafaela Dieu
No grace, say the beast’s own name
Left hand up by the end of the day
Many gonna die and the sun don’t shine
When the servants have their way
—“Servants”
Advertisement:

Zeal and Ardor is an avant-garde musical group created in 2013 by Swiss-American musician Manuel Gagneux. It combines elements of blues, gospel, traditional African-American spirituals, and Black Metal. The idea for this unusual combination originated on 4chan’s music board, when Gagneux was challenged to create a song combining black metal and traditional black American music (though because this was 4chan, the poster didn’t say “black American”). Gagneux, the son of an African-American mother and a Swiss father, has also stated that a significant idea behind the project was asking what would have happened if African-American slaves had embraced Satanism rather than Christianity (based on the observation that both they and Scandinavia were forcibly converted to Christianity in real-world history).

After a self-titled demo in 2014, they released their first album, Devil Is Fine, in 2016, to significant critical acclaim. Their second full-length, Stranger Fruit, followed in 2018.

You can stream and purchase their discography on Bandcamp