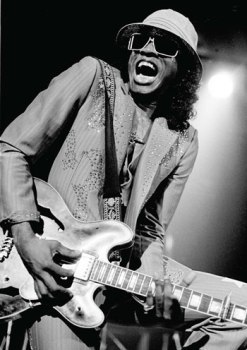 The original "Gangster Of Love".
Advertisement:

His father was a pianist, who taught him music. Johnny's grandfather, a preacher, gave him his first guitar, but told him to never play blues music, which still had a sleazy reputation in the 1930s and 1940s. Johnny evidently broke that promise and became first noticed after winning local talent shows. He started his career as a guitarist and pianist for other Jump Blues bands such as Chuck Higgins and Amos Wilburn.

In 1954 he signed to the Federal label and released "Space Jam" (1954), which featured innovative guitar effects such as reverb and feedback. As he explained himself: "I used to play the guitar standing on my hands, I had a 150 foot cord and I could get on top of the auditorium - those things Jimi Hendrix was doing, I started that shit!" Watson still scored hits in the 1960s and 1970s, as he made mixed Disco and Funk in his playing: "Superman Lover", "I Need It" and "A Real Mother For Ya" (1977) were his biggest hits from this period.

Though not a huge name in blues his music is widely acclaimed. Steve Miller covered "Gangster Of Love" in 1968. Stevie Ray Vaughan saw Watson as one of the best blues guitarists ever. Etta James went on record as saying: "I got everything from Johnny... He was my main model... My whole ballad style comes from my imitating Johnny's style... He was the baddest and the best... Johnny Guitar Watson was not just a guitarist: the man was a master musician. He could call out charts; he could write a beautiful melody or a nasty groove at the drop of a hat; he could lay on the harmonies and he could come up with a whole sound. They call Elvis the King; but the sure-enough King was Johnny 'Guitar' Watson." Frank Zappa saw him as one of his prime influences and especially liked the fact that his guitar solos were longer than those from other blues guitarists at the time. "Three Hours Past Midnight" was one of his favorite records of all time, according to a 1975 interview for "Let It Rock" and a 1989 appearance in the American radio show "Castaway's Choice". He also said that if he had to narrow his choices down to one record it would be that song. Later in his career Watson and Zappa became lifelong friends. Watson also performed on Zappa's albums One Size Fits All (1975), Them or Us (1984) and Thing-Fish (1985).