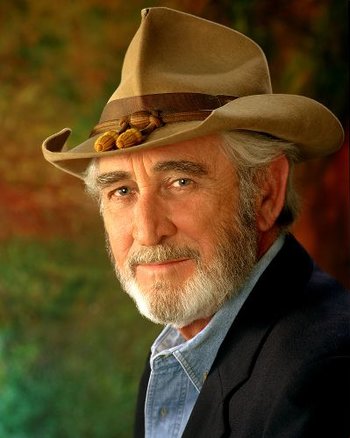 Donald Ray Williams (May 27, 1939—September 8, 2017) was an American Country Music singer with a career spanning from the 1960s to The New '10s. He started out as a member of the Pozo-Seco Singers, a folk quartet that had a handful of hits on the pop charts.

Williams signed with JMI Records as a solo artist in 1972 and scored a few hits, but achieved his breakthrough in 1974 with "I Wouldn't Want to Live If You Didn't Love Me" on ABC/Dot. He stayed with Dot until it was bought out by MCA, and later recorded for various other labels. He scored 17 #1 hits on the country charts throughout the 1970s and '80s, and even had a few hits into the early '90s. He had been semi-retired since about 1992, but continued to record sporadically up until his death.

Williams's material was characterized by his soft singing voice and lighthearted ballads. He established a longstanding collaboration with acclaimed songwriter Bob McDill, whose literate, but unpretentious, lyrics suited Williams's voice perfectly. His most successful crossover hit is "I Believe in You" in 1980, which went to #24 on the pop charts. His 1979 hit "Tulsa Time," as close as his material ever got to classic/southern rock, would be covered a year later by Eric Clapton, while another 1979 Williams' hit, "It Must Be Love," was covered by Alan Jackson in 2000.