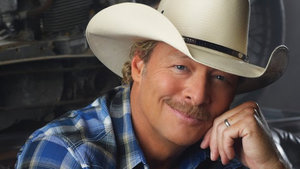 Jackson started out unassumingly enough in 1989 on Arista Records, which at the time had virtually no experience in the country music business. He was even working with Keith Stegall, a former solo singer with no production experience. Although his debut single "Blue Blooded Woman" flopped, he first cracked the Top 40 in 1990 with "Here in the Real World" and enjoyed nearly 20 years of hits. Coinciding with his departure from Arista, he provided duet vocals on Zac Brown Band's "As She's Walking Away". With his fortunes fading at radio in The New '10s, Jackson has moved to his own label, Alan's Country Records, with distribution by EMI.

Jackson also co-wrote singles for Faith Hill ("I Can't Do That Anymore"), Randy Travis ("I'd Surrender All", "Better Class of Losers"), Clay Walker ("If I Could Make a Living") and Chely Wright ("Til I Was Loved by You"). His nephew Adam Wright, and Adam's wife, Shannon, record on Alan's label as The Wrights, and they have occasionally collaborated with him.

Alan Jackson and his works provide examples of: