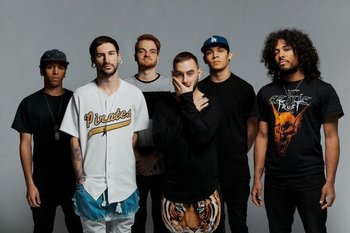 Issues is an American Metalcore/Nu Metal/Pop/whatever they feel like band from Atlanta, Georgia. They were formed in 2012 by Tyler Carter, who wanted to form a band with other members of his former band Woe, Is Me (which included co-vocalist Michael Bohn, and brothers Ben and Cory Ferris). Ultimately, Ben and Cory weren't able to attend recording sessions, and left before they made any material. They released their first EP Black Diamonds soon afterwards. The lineup eventually became as follows.

Their sound is essentially a mix of Metalcore, Nu Metal, and R&B, along with anything else they feel like. You can expect clean vocals that wouldn't be out-of-place on Top 40 radio mixed in with harsh screams and breakdowns. There's also prominent turntable scratching, electronica and sampling, where the turntables are treated as a lead instrument as much as the guitar. Other genres make surprise appearances.

In early 2014, released their debut Self-Titled Album to moderate success, going Top 10 upon release and were signed on to tour both North America and Europe. Their success has led to talks of a possible nu metal revival, time will only tell if that's the case. They followed-up their album with a second EP, titled Diamond Dreams soon afterwards.

In 2015, it was announced that the band would become a five-piece, with turntablist DJ Lophiile leaving to focus on producing music. However, he will still work with Issues, but won't be an official member. They released their second album Headspace in early 2016.

The band confirmed in January 2018 that Michael was no longer a member, with various stories disagreeing whether it was artistic disagreements or if he was actually forced out. The band decided not to replace him, and released their third album, Beautiful Oblivion, in 2019.

In September 2020, the band kicked Tyler Carter out of the group after he was accused of sexually harassment of underage fans. That's all we'll say about that.