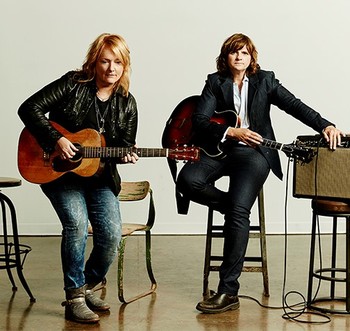 Emily Saliers and Amy Ray
I went to the doctor, I went to the mountains
I looked to the children, I drank from the fountains
There's more than one answer to these questions
Pointing me in a crooked line
And the less I seek my source for some definitive
The closer I am to fine
— "Closer to Fine"
Advertisement:

The Indigo Girls are an American folk rock duo consisting of singer-songwriter/guitarists Emily Saliers and Amy Ray (who has also released six albums as a solo act).

After meeting in grade school and beginning their musical collaboration in college, they have been performing together since the late 80s and as of 2019 are embarked on an international tour with the University of Colorado Symphony Orchestra. They are known for their complementary vocal and guitar arrangements and popular songs "Closer to Fine", "Galileo", and "Power of Two", as well as for their activism both on behalf of and apart from the lesbian community.