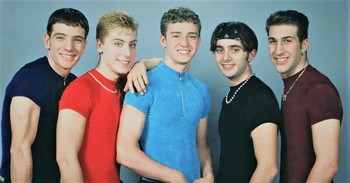 From left to right: JC Chasez, Lance Bass, Justin Timberlake, Chris Kirkpatrick, and Joey Fatone
"I wanna see you out that door..."
Advertisement:

Think of late '90s/early '00s pop music, and chances are that one of your thoughts will be of *NSYNC.

With one successful Boy Band under his belt, Lou Pearlman sought to strike gold twice. In 1995, Pearlman approached Chris Kirkpatrick (age 23), an employee of Universal Studios Orlando and singer for The Hollywood Hi-Tones, to form a vocal group in the same vein as the Backstreet Boys. Chris called up Justin Timberlake (age 14), an alumnus of the 1990s revival of The Mickey Mouse Club, whom he'd allegedly met at various auditions around Orlando. Justin then called JC Chasez (age 19), his former castmate on MMC. Chris and JC invited Joey Fatone (age 18), a mutual acquaintance, after running into him at a club. Chris and Joey met while working at Universal Studios, Joey as the Wolfman in the Beetlejuice Graveyard Revue. JC and Joey, meanwhile, were old friends and ran in the same social circles during JC's time on MMC. Joey then recruited Jason Galasso, a friend of his from high school.

Sometime later, the group was set for a live showcase at Pleasure Island in Orlando and started negotiations with Pearlman's label, Trans Continental Records. Galasso suddenly dropped out a few weeks before the showcase, unhappy with the group's direction, and left the others scrambling to find a replacement. Justin eventually called his old vocal coach in search of a bass singer, who recommended a kid from Mississippi named Lance Bass (age 16). October 1, 1995, *NSYNC officially formed.

The showcase was filmed and sent out to record labels and the boys signed to Trans Con. Unfortunately, the musical climate in the US was still very much entrenched in the Grunge scene and no labels were willing to take them on. Europe, however, was another story. Johnny Wright, former manager of New Kids on the Block and then-current manager of the Backstreet Boys, was on the lookout for more American acts to bring overseas. Impressed with the guys' demo tape and showcase, he brought over reps from BMG Entertainment in Germany to Orlando to meet with the group. The reps liked what they saw and were ready to sign NSYNC, but not without a few stipulations. First, they wanted the group to change their name, due to not understanding the meaning and it being difficult for German people to pronounce. Second, they wanted Lance out of the group, as they felt he was a weak link within the group. The boys fought back and after some negotiating they were signed to BMG Germany and brought in Wright to manage them.

They were sent to Sweden to begin work on their first album. Their first single, "I Want You Back" was released on October 7, 1996, and they set off on a whirlwind tour of Europe. Their debut album, 'N Sync, was released May 26, 1997, and reached number one in Germany by its second week. They released several other singles, such as "Tearin' Up My Heart", "Here We Go", and "For The Girl Who Has Everything", before getting the attention of Vincent DeGiorgio, an A&R rep for RCA Records, the American subsidiary of BMG Entertainment. They were eventually signed to RCA and began retooling their album for the US market.

They released "I Want You Back" in the US on January 20, 1998, which charted moderately well. Their reworked album, featuring an altered tracklist including newly recorded songs and now titled *NSYNC, was released March 24 the same year. The album floundered for a bit, but they soon received their big break by way of, funnily enough, the Backstreet Boys, who bowed out of a concert special for the Disney Channel. The offer was then given to NSYNC & the special was just what the group needed; after its initial airing (and subsequent re-airings) *NSYNC shot up through the Billboard charts and they suddenly found themselves in high demand. They made several television appearances, including a Christmas special for the Disney Channel and a spot in the Macy's Thanksgiving Day Parade, recorded a Christmas album, Home for Christmas (which also went multi-platinum) and after some time opening for Janet Jackson's Velvet Rope World Tour, set off on their own headlining tour in the US.

By 1999, NSYNC had successfully broken into the US market. They were also being severely overworked. With their Ain't No Stoppin' Us Now Tour still in full swing, they began work on their next album while also filming for television specials and making various other public appearances. In May 1999, Lance collapsed following the filming of Summer Jam, a televised concert on ABC, and it was discovered that Lance had an undiagnosed heart condition and that the collapse was caused by a heart murmur triggered by stress and general exhaustion. Having been restless for quite some time at that point, this would be the event that led the group to finally break away from Lou Pearlman and Trans Continental Records. For several years Pearlman had been withholding money from the group, stating that boys had yet to make up for all the money he put into financing the group. Despite their non-stop touring and multi-platinum album sales, their first real paycheck amounted to a meager $25,000 per member. While they first aimed to simply renegotiate, they quickly changed their tune after looking through their contracts, in which they discovered the full percentages Pearlman was taking from them as well as a clause in their original contract with Trans Con which stated that their first album was to be released in the US within a certain time frame; not only was the time frame not met, but the fact that they were first released in Germany was technically a violation of the contract. In September 1999, they announced they were breaking their contract with RCA and Trans Con and signing on to Jive Records.

NSYNC was then embroiled in a nasty legal battle for the next 3 months. BMG and Trans Con filed a $150 million lawsuit against NSYNC and Jive for breach of contract, intending to prevent the group from moving to Jive and releasing anything under the name NSYNC. The group counter-sued for $25 million, accusing Pearlman and Trans Con of exploitation and endangerment. The suit was settled out of court and by December 1999 NSYNC finalized their move to Jive Records. For those curious, the percentages Pearlman was receiving from the group: 55% gross and 37.5% net of both touring revenue and celebrity endorsements, 75% record royalties, 80% merchandising, and 100% music publishing.

NSYNC continued their work on their next album, releasing the single "Bye Bye Bye" in January 2000. The song was a hit and further solidified the group as a pop mainstay. Propelled by their victory against Pearlman, the guys underwent a media blitz and made countless television appearances, including a rather memorable appearance on Saturday Night Live. They were regulars on MTV and practically took over the network the weeks leading up to the release of their much anticipated third album, No Strings Attached. Released on March 21, 2000, the album went platinum on its first day and by the end of the week sold a record 2.42 million. Curiously, their next single, "It's Gonna Be Me", would be their only #1 Billboard hit. In May 2000, they embarked on their No Strings Attached Tour, the making of having been documented on the MTV special Making the Tour, the tour's stop at Madison Square Garden filmed and broadcast on HBO, and a condensed film of the tour released to IMAX theaters.

They took a brief break in early 2001, during which Lance and Joey filmed the movie On the Line. Although they were not expected to begin work on their next album for some time, Justin's and JC's sudden stream of songwriting would cut short the group's break and recording for the next NSYNC album began with Lance and Joey still in the midst of filming. Their single "Pop" was released in May 2001 and they set off on a stadium tour, titled the PopOdyssey Tour, months before the release of their album. Celebrity was released on July 24, 2001, and although it sold substantially less than the previous album, it still sold a record 1.88 million its first week.

In March 2002 they embarked on the second leg of their PopOdyssey Tour, rebranded the Celebrity Tour, after which they went on hiatus. Justin kickstarted his massively successful solo career, Joey went on Broadway, Lance became a licensed cosmonaut, Chris got on an RV and traveled the US, and JC considered acting and continued songwriting, which led to the release of his own solo effort in 2004. Work on the next NSYNC album was to begin in the fall of 2003, but plans ultimately fell through. They still attended awards shows and even regrouped for the 2003 Grammys, where they performed an a cappella tribute to The Bee Gees. Their last public appearance together during this era would be 2005's Challenge for the Children VII, their annual charity event they had been holding since 1999.

In 2007, Lance released an autobiography, titled Out of Sync, in which he described what was essentially their break up. At 2004's Challenge for the Children VI, NSYNC sang "The Star-Spangled Banner" for what would be their final public performance together. At some point during the event, Justin admitted to the others that he didn't want to return to the group. JC was intent on carrying on with NSYNC without Justin, but Chris refused to go on without all of them, and with only three members willing to continue, they called it quits. They have since performed sporadically with one-off events. The guys have briefly reunited at the 2013 VMAs, in 2018 for their induction into the Hollywood Walk of Fame, and as a quartet at Coachella in 2019, but have stated they have no further plans for the group.

In the end, they turned out to be pretty damn successful. No Strings Attached and Celebrity currently hold the records for second and third highest opening week album sales in the US, they've sung with the likes of Aerosmith and Michael Jackson, they've performed at the Super Bowl and the Olympic Games, and they have their own wax figures. Not too bad.

Tropes related to the band and their music: