Music / In This Moment 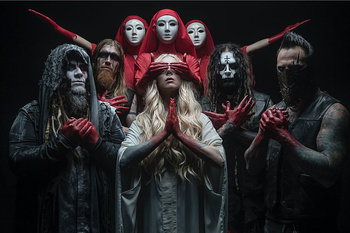 Describe In This Moment here, because it’s a beautiful tragedy.

In This Moment is a female-fronted metal band from Los Angeles. Fronted by Maria Brink, they've been around for a while, having released their first album Beautiful Tragedy in 2007. Their ever evolving sound has garnered them an increasingly large fanbase over the years, and with the release of Blood in 2012, they broke through to the mainstream as one of the biggest, if not the biggest female-fronted metal band on the American market, and rivaled by Halestorm and The Pretty Reckless as the biggest female-fronted rock band, period, of The New '10s.

They started off as a pretty straight-forward Metalcore outfit, but eventually downplayed that aspect and brought other elements such as Industrial Metal, Gothic Metal, Electronic Music, and finally Nu Metal, the latter of which proved to be their key to success (ironic, given nu metal's status as a Dead Horse Genre). Their single "Blood" became their first song to crack the mainstream rock charts, and it reached #9. All of their follow-ups have since charted there as well. Their unique sound of heavy riffs with rough, screamed vocals manages to sound hard-hitting while still being radio friendly.

Outside of the band, Maria Brink has made a number of appearances in songs from other bands. These include "Here's to Us" by Halestorm, "Anywhere But Here" by Five Finger Death Punch, and "Gravity" by Papa Roach.