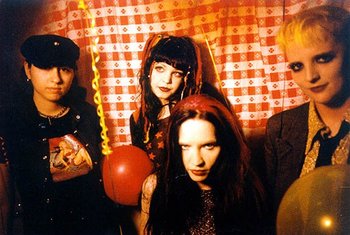 Probably the happiest you'll ever see them.
Influences:
Advertisement:

Jack Off Jill (JOJ) is a "riot goth" band, formed in 1992. They were named by Jessicka's friend Marilyn Manson and, for the most part, their music and aesthetics match his.

They only released two albums before they broke up in mid-2000, after being Screwed by the Label, and because of tensions in the band that caused the constantly changing lineup. They reunited in 2015, and toured throughout the year.

They achieved most of their critical acclaim long after their breakup, the band being called "riot-goth legends" and "cult heroes", and Clear Hearts, Grey Flowers being praised as "excellent, yet underappreciated".

and good friends with Lyn-Z Way. Michelle Oliver and Tenny Arslanyan went on to perform in the band Set to Zero, and Robin Moulder is active with the music project TCR.

When I am Queen on royal trope made out of parts of broken bones...: