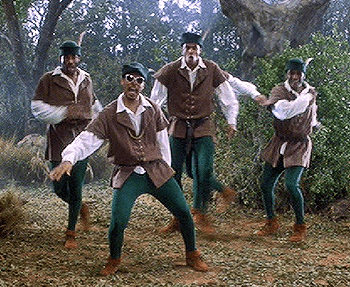 "Here's a little story we'd like to tell
About one bad archer you know so well..."
And now the token rap verse that doesn't make any sense
But helps me get a small percentage of the urban music market
— Jon Lajoie, "Pop Song"
Advertisement:

You're listening to a pop song, when suddenly, out of nowhere, a rapper jumps into the song. Then, almost as suddenly as they appeared, they disappear into the night, and the song returns to normal.

It can be, but is not necessarily, a rapping bridge. This is generally due to deals made by record companies to promote both artists. Or, more simply, the two could be genuine friends who work together all the time. Such songs are often bowdlerised on the radio when the entire rap verse is deleted even if it contains nothing questionable, as if the musical concept itself is offensive (or maybe because the station figures their listeners don't like rap). This happens a lot during eras when Top 40 and urban radio don't have a lot of crossover artists — it's an attempt by labels to tentatively promote pop artists to a more urban audience and vice versa without committing to a verse they can't remove.

Don't be surprised to find the pop singer returning the favor by singing the hook in a later song by said rapper.

For those looking for background information on the hows and whys of this trope, Slate's "Hit Parade" podcast did an an entire episode

on the history of rappers appearing as guest performers pop songs.

A similar practice existed in the early 1940s (which could be called A Wild Texan Appears), where a guy with a southern accent suddenly started talking over the music without warning. Another similar practice existed during the electronic music craze of the early-to-mid-2010s (which could be called A Wild Dubstep Producer Appears), where the song, without warning, would stop dead for a dubstep-esque breakdown (notable examples include Justin Bieber's "Beauty and a Beat" and Nicki Minaj's "Starships").

The trope name is a pun on a line in the Pokémon games "A wild <Pokémon> appeared!", which has become a meme with the verb in the present tense "appears".

Debbi Raps It Out

Debbi Raps It Out