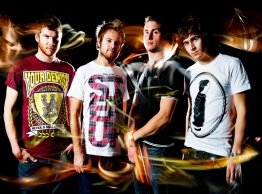 From L to R: Rory, Rou, Rob, Chris
Enter Shikari are a British four-piece Electronicore / Avant-Garde Metal band. They could probably be described as post-hardcore, although they also have elements of punk, metal, screamo and many different sub-genres of electronic music, and even occasionally hip hop.
Advertisement:

They're named after a boat that Rou's uncle had. "Shikari" also means 'the hunter' in Hindi.

Enter Shikari have examples of:

If you were looking for 'Enter Shakira ', you may be interested in this YMMV.