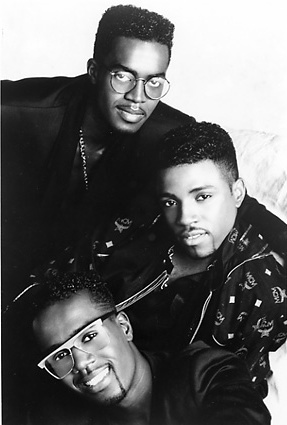 Guy is an R&B group from Harlem, New York that's been active on and off since 1988. The group was one of the most popular and influential acts of the late 80s an early 90s, and helped bridge the gap between the hip hop and R&B audiences. They were also responsible for helping Teddy Riley cement his status as the "King of New Jack Swing".

Forming in Harlem in the late 80s, Guy originally consisted of Teddy Riley, Timmy Gatling, and Aaron Hall. Teddy and Tim were childhood friends, and were previously a part of a short-lived boy band called Kids At Work a few years prior, while Aaron was Tim's co-worker at a record store. Under the guidance of Gene Griffin, the group signed to the then-new Uptown Records division of MCA, and recorded their debut self-titled album, but Gatling would eventually break from the group after constant and intense fights with Aaron during the recording sessions, leading to him getting replaced by Aaron's brother Damion (Gatling's likeness and vocals stayed on the album, however).

Guy's debut album was released on June 1988, and was met with critical and commercial acclaim, however, the behind the scenes turmoil continued for the group. A tour with fellow R&B group New Edition quickly went south when things started to get heated between the groups and their entourages, leading to Guy's bodyguard getting murdered by one of NE's production managers. Later that year, Brandon "B-Dogg" Mitchell, Teddy's half-brother, and a member of Guy's sister group Wreckx-N-Effect, was shot dead. And to make things worse, both Guy and Wreckx acrimoniously split from Gene Griffin when they discovered he was stealing millions from them by falsely giving himself writing and production credits on their songs behind their backs.

Guy & Wreckx would verbally retaliate back at Griffin with the former's sophomore effort The Future, but the damage was done, and Guy eventually split by late 1992, with the Hall brothers recording solo albums, and Riley continuing to produce for other artists, and forming his second group, Blackstreet. The group had reunited multiple times between 1995 and the 2010s, including a third album in 2000 that tanked in sales, but have yet to reform in a full time capacity.