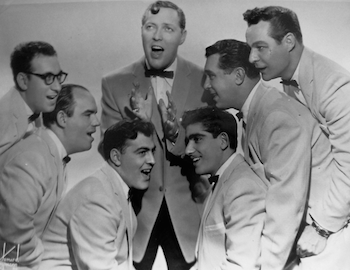 A pioneering American Rock & Roll band, led by Bill Haley (1925–1981), the Comets are credited with popularizing rock & roll to an international young white audience, thanks to their biggest hit and Signature Song: "Rock Around the Clock". They had two other major hits with "See You Later Alligator" and "Shake, Rattle and Roll", scored dozens of smaller hits around the world between 1952 and 1974.

Haley was born in Highland Park, Michigan and worked in radio, primarily in the Philadelphia region, while trying to launch his musical career. Initially a member of the western swing group The Down Homers, he formed his first country music group, the Four Aces of Western Swing, circa 1946. In 1949-1950 this group evolved into the Saddlemen. Their Cover Version "Rocket 88" (1951) fused African-American R&B with country swing and is seen as the very first rock 'n' roll and Rockabilly recording, though it didn't make much impactnote The group had actually been experimenting with this hybrid of rhythm and blues and country swing for at least a couple of years previously, such as a recording of Ruth Brown's "Teardrops From My Eyes" released on Atlantic Records in 1950. In the fall of 1952, the Saddlemen changed their name to Bill Haley and His Comets and in 1953 scored their first national chart hit with an original song titled "Crazy Man, Crazy". In 1954, they recorded two of the first international rock and roll hits: "Rock Around the Clock" (technically a cover song, but only virtue of the fact the owner of Haley's previous record label wouldn't let him record it first), which was the first Rock and Roll song to hit No. 1 on the charts when it was reissued in 1955, and "Shake Rattle and Roll," another Cover Version which was the group's first million seller and rock and roll's first international chart hit. A third million-seller, "See You Later Alligator," was recorded in late 1955.

Haley and the Comets are credited with introducing rock and roll to the mainstream (read: white) audiences, forming a buffer between the big band era familiar to most, and the wilder forms of rock and roll developed by artists such as Elvis Presley (who recorded "That's All Right Mama" months after Haley recorded "Rock Around the Clock" and didn't become a national success until early 1956, 18 months after "Clock" was recorded). Much of Haley's popularity was caused by the use of "Rock Around The Clock" in films such as Blackboard Jungle (1955) and Rock Around the Clock (1956), in which the band appeared. (They also appeared in the sequel, Dont Knock The Rock (also 1956).) Such films also helped make the genre more popular in the rest of the world. The band toured in Europe, Australia and South America with equal success during the late 1950s, with Haley's arrival at Waterloo Station in London in the spring of 1957 sparking a riot. The group also filmed an appearance in the 1959 German musical "Here I Am, Here I Stay" during a visit to Germany in October 1958.

As the "father of rock 'n' roll", Haley's music was praised by teenagers, but the elder generation was genuinely outraged and scared by this wild music that inspired teenage rebellion and disobedience of authority. In the wake of theirs, and Chuck Berry's, success, countless other rock & roll performers, most notably such as Elvis Presley, Little Richard, and Jerry Lee Lewis became superstars, eclipsing Haley's own stardom in the end, because they looked far younger, sexier and energetic compared to Haley himself. For the Comets, chart hits in the US ended in 1960, however the group continued to have major success in Latin America where they recorded "Florida Twist" in 1961, co-written by Haley's sax player and which for a time was Mexico's biggest-seller ever and today is considered a standard. They also returned to the charts in the UK several times with "Rock Around the Clock" during the 1960s and early 1970s, with a 1974 reissue of the song, tying in with its dual use in American Graffiti and Happy Days leading to it returning to the Billboard Top 40 as well. In the late 1960s and 1970s, Haley and the Comets continued to be popular on the oldies revival circuit and notably secured an 8 1/2-minute standing ovation after a 1969 performance at Madison Square Garden. In 1979, Haley was still selling enough for his label at the time, Sonet Records, to present him with a record award during a TV appearance on UK's ITV.

Haley and his ever-changing band continued performing right through the 1970s, even getting to perform for Queen Elizabeth II in November 1979. His final performances were in May 1980 in South Africa, but ill health forced him to cancel a fall 1980 German tour and an early 1981 record session planned for Memphis. Haley, who had battled alcoholism since the 1960s, died of a brain tumor on February 9, 1981 (though media reports at the time suggested heart attack). He was inducted into the Rock and Roll Hall of Fame in 1987.

Since his death, numerous versions of The Comets have continued to perform and record, with at least four different contingents known as of 2017. The Comets as a band, meanwhile, entered the Rock and Roll Hall of Fame in 2012 as part of a special induction of backing groups.