Film / Rock Around the Clock 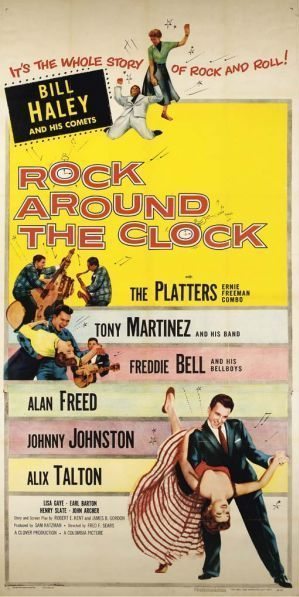 Rock Around the Clock is a 1956 musical film featuring Bill Haley and His Comets and other bands such as the Platters, Tony Martinez and His Band, and Freddie Bell and His Bellboys.

The film tells a highly fictionalized rendition of how rock and roll was discovered. As band manager Steve Hollis (Johnny Johnston) observes that big band dance music is failing to draw audiences any longer, he comes across a new sound that piques his interest. While traveling through a small town, he attends the local teenage dance and meets local band Bill Haley and His Comets and is introduced to rock and roll music and dancing. Convinced that rock and roll will be the next big thing, Hollis strikes a deal to manage the group and also strikes up a romance with dancer Lisa Johns (Lisa Gaye). Steve turns to agent Corinne Talbot (Alix Talton), who handles bookings for nearly all of the venues in which Steve needs the band to play to gain them exposure, but Corinne's primary interest in Steve, however, turns out to be more than professional, and so Steve will need to maneuver around her to give the Comets the exposure they need.