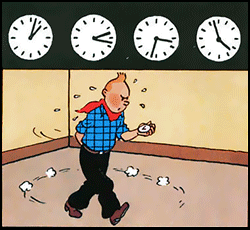 "Powerful images for the passage of time:
A clock's hands, sweeping past 12!"
— T-Rex, Dinosaur Comics, "I do my best"

A relative of the Exploding Calendar, the passage of time is shown by speeding up the hands of a clock while showing the montage of a character performing a task.

Can also be seen as a gag where after the hands of the clock start spinning, one character says "Stupid clock's broken again!" and fixes it.

Since showing the hands actually spinning has become a bit of a Dead Horse Trope outside comedy, a more common variation is to focus in on the clock and gradually fade or cut from it reading one time to it reading another. In video games they often accompany the Fast-Forward Mechanic. Might soon become a Forgotten Trope, or at least evolve into a similar thing involving a digital clock due to their prevalence. (Younger children, having grown up with only digital clocks, may not even know how to tell time on an analog clock, or might have never even seen one.)