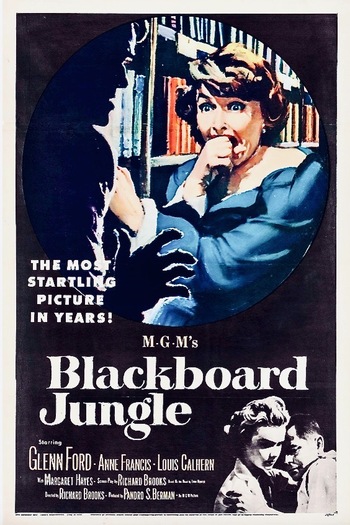 We, in the United States, are fortunate enough to have a school system that is a tribute to our communities and to our faith in the American youth. Today we are concerned with juvenile delinquency—its causes—and its effects. We are especially concerned when this delinquency boils over into our schools. The scenes and incidents depicted here are fictional. However, we believe that public awareness is a first step toward a remedy for any problem. It is in this spirit and with this faith that Blackboard Jungle was produced.
—Opening Scroll
Advertisement:

Blackboard Jungle is a 1955 drama film set at an Inner City School, written and directed by Richard Brooks (based on Evan Hunter's novel of the same name) and released by Metro-Goldwyn-Mayer.

Richard Dadier (Glenn Ford) is a newly-graduated teacher who really wants to inspire young people. Unfortunately, he takes a job at North Manual Trades High School, where gangs are everywhere, nobody has respect for their elders, and the other teachers have long since burnt out. Mr. Dadier is initially met with hostility and violence, but by refusing to give up, treating his students with respect, and trying innovative ways of engaging his class, he slowly gets the students on his side, particularly unofficial class leader Gregory Miller (Sidney Poitier).

At the time, Blackboard Jungle was notable for dropping the bombshell that high schools were not idealistic happy little teaching institutions where everyone behaved and no one would ever dare think of challenging authority, and that students could be angry, disillusioned, and have their own set of problems, almost like they were human or something. Suburban adults were horrified and suburban kids were inspired. This, along with the movies of James Dean and Marlon Brando, ushered in the concept of the Troubled, but Cute teen rebel.

Blackboard Jungle is also famous for its theme song. Director Richard Brooks wanted to use a song that all the young folks would be into, and borrowed some of Glenn Ford's son Peter's records. Luckily Peter had good taste. Richard chose "Rock Around the Clock" by Bill Haley & His Comets and played it over the opening credits. Rock & Roll was still a niche genre, but "Rock Around the Clock" proved to be so popular that teenagers danced in the aisles when it came on and Rock & Roll turned mainstream.

In 2016 the National Film Registry deemed the film "culturally significant".